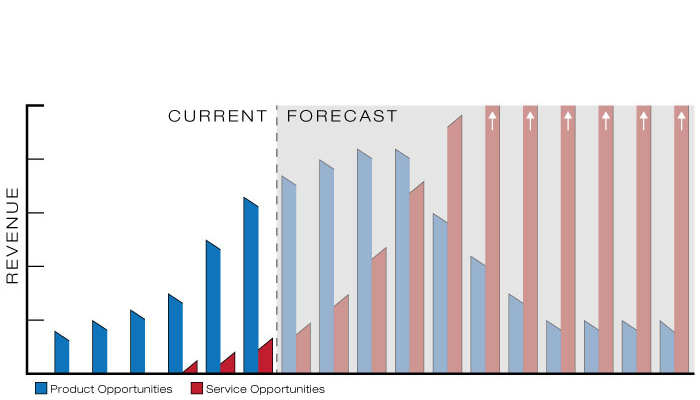 Paul was in a quandary. He had built up a nice company and captured a decent portion of a rising segment. But looking into the future, he saw trouble ahead. As his segment matured, he forecasted that the segment would commoditize, revenues would drop, and margins shrink.

Like most business owners, dropping revenue and shrinking margins takes the fun out of the game. However, a service segment had emerged. It was in a fledgling stage but showed incredible growth potential.

At first glance, Paul thought his options were:

What would you do? What did Paul do?

1) Selling now would mean foregoing the revenue he could capture for the next several years and, more importantly, the multiplier he could get in a sale after his company grew for the next several years.
2) Option two could be ok if he timed it exactly right, but liked his industry too much to want to walk away yet.
3) His last option was to build up his own service division, but didn’t like the idea of “starting over” at ground zero on the service side.

But he choose Option 4 after Packard showed him a path to long term growth by acquisition/merger of a smaller company involved in the service segment. One that put a service division, fully formed, into his company.

WordPress.com is the best place for your personal blog or business site.

The Changing World of Employment

The blog presence of Vallon, LLC and our friends!

The latest news on WordPress.com and the WordPress community.